Since my first “no spend month,” I’ve looked much deeper into my monthly spends and budget.

A few of my hours at work were cut due to the company’s budget earlier this year and I didn’t know what would happened. I had less than a month to figure out how I was going to earn those lost hours.

But what I realized was at least for the short term, if I cut out a few things, I could try to make it work until I found more hours.

And you know what happened?

I ended up “breaking” even with less hours of work as I did when I had more. How was that even possible?

I adjusted my budget 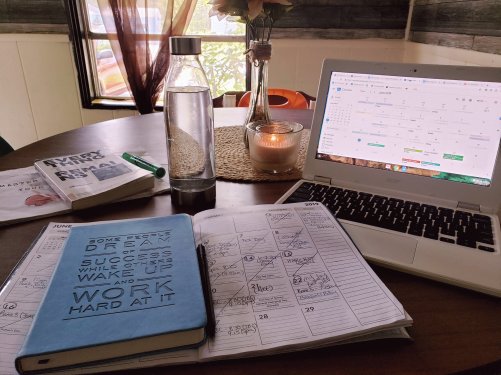 Through reading many articles and watching countless YouTube videos* it’s simple; the more you make the more you tend to spend.

No longer was I getting breakfast and lunch “out” on my work days (unless I had a gift card). While this maybe only added up to about $15 per week, it all obviously adds up.

I’ve been wanting to add my regular $10 a month gym membership back since my first “no spend month” or NSM for short. But I sat down and it got me thinking about my budget for next year.

I asked myself “why did I want it back?”

I realized I really wanted to use barbells.

I have have a bad back, so I don’t use heavy weight for the barbells.

My max right now is 40lbs. I am also not a fan of working out at home in the winter, especially since we are mostly indoors. #cabinfever >.<

I decided I’d purchase this barbell set in the spring and sign up for the gym now.

If I sign up for the gym just during these colder months (about November – April), it will save me at least $50, plus at least $100 for gas. Those $150 could be used to go to SIX Pure Barre Classes, which I do still enjoy.

During my second “ NSM,” it was a little harder because of Christmas specials popping up. I had already budgeted fund for the twin’s birthday for my NSM, so that wasn’t a problem.

I did end up getting a few things for Christmas because they were such a great deal.

It’s why you may have noticed their room was a bit rearranged in my home tour post. I had decluttered their room even more than to make room for this kitchen.

Plus, I was trying to keep a ton of mess out of the living room. I now only keep cars, their car rug (it will be switched out in spring), a few books and coloring items .

Even though I ended up spending that extra $44.99 during my NSM, I managed to pay off a bill that was just over $200. I find it incredible how really looking at your budget and cutting those miscellaneous spends really make a difference.

It’s not about depriving yourself. It’s about focusing on what matters and what goals are most important to you and your family.

*If you are looking for budgeting/ frugal hacks, my current favorite YouTubers are:

One thought on “November “No Spend Month” Recap & Budget Planning for 2020.”